Home One Health in the News Cornell stands at the cusp of a new era, Pollack says

Cornell stands at the cusp of a new era, Pollack says

“We stand at the cusp of a new era for the university – in which we can and will be the model of a relevant, premier university for the 21st century,” said President Martha E. Pollack in her State of the University address Oct. 20 in Statler Auditorium.

Speaking to an audience of 675 trustees, Cornell University Council members, alumni, faculty, staff, students and friends, Pollack outlined how the university is stepping into this new era. She said Cornell must: 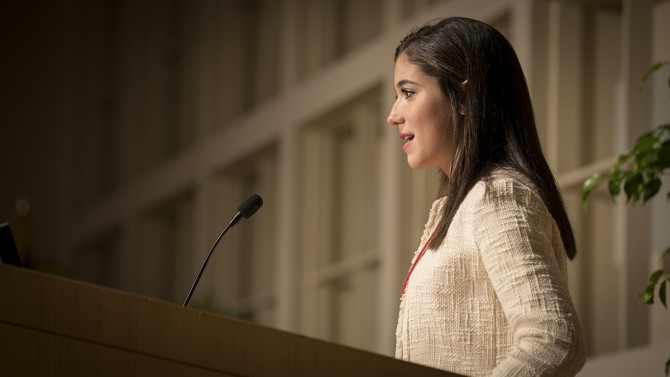 Sofia Vila ’18 speaks during the Joint Annual Meeting Oct. 20 in Statler Auditorium on behalf of her father, Enrique Vila-Biaggi ’94, MEN ’95, chair of the Cornell University Council. Vila-Biaggi had to remain home in Puerto Rico to take care of his family, his properties and tenants in the wake of the ongoing recovery from the devastation in Puerto Rico from hurricanes Irma and Maria just over a month ago.

These aspirations, Pollack said, align with the priorities she laid out for Cornell in her inaugural address: to foster academic distinction, to create a culture of “educational verve” and to fulfill civic responsibilities.

Efforts already are moving forward, Pollack said. In the realm of academic distinction, she highlighted the university’s “One Health” approach to public health and the innovative new Master of Public Health degree program, as well as the Cornell Neurotech initiative between the Colleges of Arts and Sciences and Engineering and several other cross-college and cross-departmental projects, including ones exploring earth-source heat and cryptocurrency.

Pollack noted Cornell’s campuses in Ithaca and New York City as another distinctive feature and a source of the university’s strength. She described how, in building on a century of impact in New York City with the opening of the Cornell Tech campus last month, the university is “doubling down” on its downstate presence, actively seeking additional ways programs on both campuses can enhance each other.

“We’re now planning Phase 2 of the tech campus’s development and, concurrently, I am asking a faculty committee to develop a New York City vision for the next decade that will complement and enhance what we are doing in Ithaca, making Cornell more than the sum of its individually excellent parts,” Pollack said.

Pollack gave an update on the Cornell SC Johnson College of Business. Its faculty is now the third-largest business faculty in the country, and there are almost 6,000 students in the college’s majors and minors, she said.

This fall, the college is launching The Business of Food initiative, which will cement Cornell’s reputation as the world’s thought leader in the global food industry, “home to faculty whose expertise spans the whole food value chain, from farm input suppliers and growers upstream, to retailers and fine-dining establishments downstream,” she said.

For examples of the culture of educational verve Pollack is seeking, she pointed to the studio curriculum at Cornell Tech, which blends engineering, business, law and computing and information science students in creating products and solving problems; and the new Weill Cornell Medicine curriculum, which blurs what had been rigid boundaries between basic science and clinical medicine with faculty using a combination of techniques to teach it.

In Ithaca, she cited the Engaged Cornell initiative, enabling students, faculty and staff to work with community partners, locally and beyond, in active learning focused on solutions to significant challenges.

Pollack also described progress on the university community’s civic responsibilities, which she defined as “an interlinked triad of principles that universities, and Cornell in particular, need to uphold”:

She pointed to ongoing initiatives and the new Presidential Task Force on Campus Climate she has convened “that will look holistically at how we can effect ongoing institutional change to help us achieve our aspirations in this area.”

“We do not yet know the full dimensions of what lies ahead, but I am convinced that we are at a moment that is transformational for Cornell and for the role it can play in the world,” Pollack said.

During the Joint Annual Meeting, Cornell remembered Peter Meinig ’61, chairman emeritus of the Cornell University Board of Trustees, who died Sept. 25.

Robert S. Harrison ’76, chairman of the board, spoke movingly of Meinig, his predecessor and friend. “All of us who knew Pete valued his judgment and his moral compass at least as much as his extraordinary philanthropy,” Harrison said.

Pollack also spoke about Meinig: “… even in the short set of experiences I had with him, his presence just shone through. I will be forever grateful for his wisdom and for the kindness he showed toward me as a new Cornell president. His intimate and deep knowledge of the university, from an association that spans more than half a century, was so helpful during my first months in office.

“He and his wife, Nancy, and their family have had a transformational impact on Cornell, and so many of us here this morning have also been influenced by him.”

This article is written by Joe Wilensky and was originally published in the Cornell Chronicle on October 20, 2017.