Winter storm Stella hit the U.S. northeast last week. The Cornell area saw 1.5ft of snow in less than 30 hours. For the first time in my four years as a student here, we got a snow day (we got two actually!). It was the first full snow day since 2007. Tompkins county even closed all roads for a day. This is what it looked like near where I live:

Can you even see the gorge?

Enroute to law school after the roads were cleared on day 2.

On both days, there was high traffic in the arts quad and libe slope. A friend convinced me that this was a once in a lifetime opportunity to go sledding at Cornell. There is a long history of winter/snow play at Cornell. I found these awesome images from 1920s-1950s as I was looking up that history: 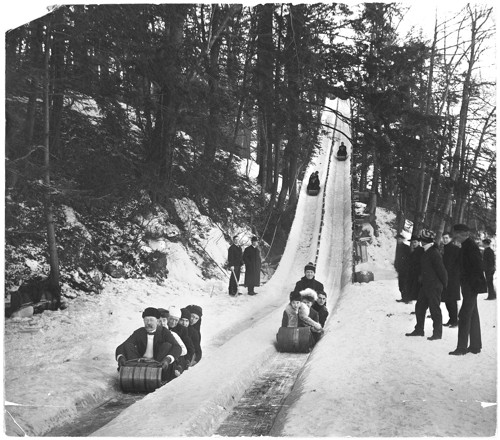 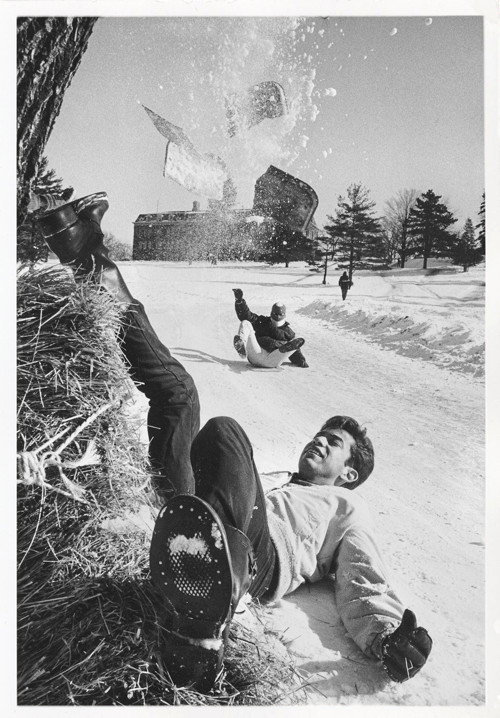 Sledding on Libe Slope is no new activity. 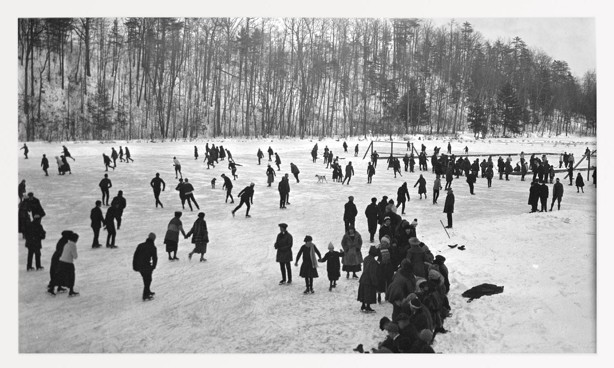 Ice Skating on Beebe lake. I don’t think Beebe lake even froze in the past three winters. Climate change?

Sledding on libe slope has been illegal for several years due to safety concerns. The toboggan slide was discontinued a very long time ago, before my parents born. You can read all about this history at this Ezra Magazine article, from which I sourced those cool black and white photos. Well, even if they had color cameras, I’m sure it would have looked just as black-and-white. Anyway, current Cornellians contributed to this rich history of snow sports last week. Somewhere in all the fun, I lost my phone in the 1.5feet of snow.

My friends and I looked for it in the deep snow and we found a phone, but someone else’s. It was returned to its owner that night. I spent a whole day without a phone (what a millennial thing to say). I realized that I used my phone for all sorts of random things – setting an alarm, checking the weather, co-ordinating meetings with people and ofcourse, I just need to look at it every few minutes. Almost exactly after 24 hours from when I lost my phone, a friend received a text from my phone; someone had found it. My phone had survived the snowstorm and I was reunited with it.

Any American university’s website contains a section on the virtues of diversity and the diversity of its students. We’ve all read the many arguments in favor of diversity in college. It broadens our understanding of the world and equips us with skills required in a global society. But none of this happens without serious engagement with the diverse people/viewpoints on campus.

In my four years here, I’ve been involved with a self-selective group of people who consciously seek diverse viewpoints; I’ve rarely had to interact at length with students who are not part of this bubble. In my European Philosophy class last week, I distinctly saw the bubbles we create here.

We had been reading Marx’s economic theory. In discussion, one student presented his observation that in modern capitalism, the working class is far better off than it was in Marx’s time. Blue collar jobs, he noted, pay more than a subsistence wage and exploitation does not occur as it did in early days of industrialization. No matter what class one belongs to, there is also opportunity for financial and social mobility, he added. Some American students in our class contested this claim with the argument that minimum wage is barely subsistence wage and that America offers equal opportunity to all more in rhetoric than in practice. A sensible discussion ensued, but was limited to the American national boundary.

The garment industry is frequently in the news for dismal working conditions and wages. In 2013, an 8-story garment factory building in Bangladesh collapsed, killing over a 1000 wage laborers. The building’s precarious condition had been ignored for months, despite repeated complaints from workers. Three years later, there is no evidence of improvement. Documentary film-makers and long-form journalists  continue to find substantial work in documenting these conditions. When capital and labor are geographically separated, a fair evaluation of the state of capitalism cannot be limited to national boundaries; the global nature of modern capitalism is essential to it.

What seemed like a simple and relevant argument to me, was completely ignored by my classmates. Without acknowledgement, they continued discussing whether the affordability of cars is a sign of progress, whether the working class in America wants some form of socialistic democracy and so on. In a discussion, mainly among students from developed nations, my “developing-world” contribution was unheard by classmates who were either unable to engage because of their ignorance, or consciously unwilling to engage with marginal viewpoints (marginal in that classroom).

It’s not enough to bring diverse students to campus, the University also needs to tackle the hard problem of facilitating meaningful engagement among these diverse groups. It’s hard because students will treat any mandatory or explicit “diversity activities” mechanically – to be checked off the graduation requirement list.