This is the end of my third academic year at Cornell. It’s been almost four years since I wrote my college admissions essays and I’ve come a long way since then. As I was looking through Masters programs to potentially apply to next year, I came across questions and essay prompts which are very similar to the ones I answered for college applications. But I approach the same questions very differently now.

The most common advice I had received for college essays was “Be yourself”. Until recently, I didn’t quite understand what that meant. I got the literal meaning: I shouldn’t pretend to be someone I’m not in order to sound impressive. I would probably produce a better essay by writing about an simple or obscure book that truly influenced me than if I tried to write about Sartre, Kafka, Shakespeare or Tolstoy without actually having understood their works. I extended this idea to the interests, experiences, beliefs and the self that I projected in my essays. I managed to do that: the person I claimed to be in my essays was a proper subset of the person I actually was. But the essays I finally submitted were not phenomenal, so I concluded that being myself was not sufficient and that perhaps I should have thrown some pretension in the mix too.

In retrospect, I know that I didn’t fully understand what being yourself meant. I had written about the superficial aspects of being myself; I described some impressive enough experience (ofcourse, that’s subjective) and said something about how it influenced me. But I never took the time to sit down and reflect on the principles I implicitly live by or the priorities which guide my decisions. The values and principles to which I’m rooted are what ultimately define me as a person. Over these three years of college, personal reflection and numerous heated discussions have helped me identify some of my personal principles. There were times when I was discussing an issue with a friend and our opinions would seem irreconcilable. So we unraveled our respective opinions and tried to find the essential point of difference and I would often be surprised by my deeper motivations which I had previously been unconscious of. Often, the same motivations appeared again and again in different contexts. I had even found myself at the verge of frustration and tears when these principles were attacked; I’ve been learning to keep my calm and objectively consider arguments against my very intimate and personal values (almost there!). But the bottomline is that when you find yourself intimately engaged with a principle, willing to make significant compromises to uphold it and relentlessly working to realize it, you know that you’ve found one of your guiding principles. That should probably be the theme of your essay. It’s this process of self-discovery and reflection that I was missing in my own efforts to “be myself” in my college essays.

To high school seniors applying to college next year, I would recommend spending time this summer reflecting (in any medium: writing, video, conversation, anything) on the essence of who you are and what your deepest motivations are. It is harder to envision and achieve than writing an essay about that impressive community service trip or research project you undertook, but the journey is personally rewarding and will ultimately produce better essays. Meanwhile, I will also be engaged in a parallel process of reflection as I begin to prepare for life after college (Yes, I’m a senior now).

Having lived in collegetown for a year, my roommate and I are both tired of collegetown restaurants. At some places, we don’t even need to look at the menu because we already know exactly what’s on it. So on Friday, when we were trying to decide where to get dinner, we couldn’t decide on a place that didn’t sound sick and boring. We have also visited our commons favourites too often this semester. Just when we were worried that we had exhausted our options, we decided to go downtown. We took a bus down to the commons and then walked all the way to Zaza’s Cucina, an Italian fine dining restaurant. The weather was nice and the sun’s oblique evening rays made our walk across residential Ithaca seem magical.

The restaurant itself was far nicer than the best collegetown restaurants. My roommate was glad this meal would be a change from the usual tofu based dishes. The average age of customers at Zaza’s was probably twice my age, which was also a welcome change. 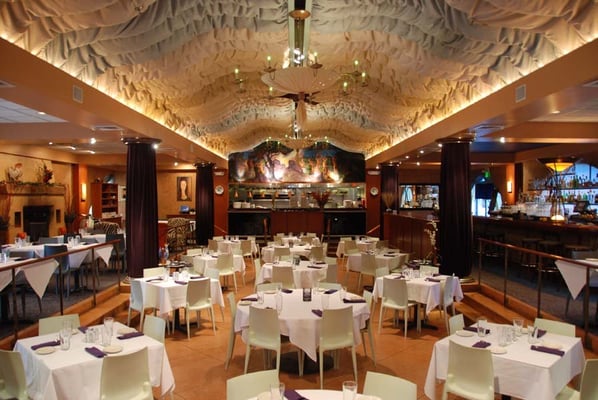 I tried the wild mushroom risotto and fell in love with it. It was surprisingly flavorful! I’m not a fan of cheese, but a certain cheese-and-tomato appetizer ( Edit: caprese) was also so flavorful that I didn’t mind the relatively large quantity of cheese. As we were eating, I had forgotten that I was in college, or in Ithaca. I had a great meal and good conversation with friends. Zaza’s ambience created a bubble outside the Cornell bubble.