On Tuesday afternoon, my memory of the four days of fall break is in a haze. I had grand visions of following a healthy routine of sleep, cooking my own food, doing the tasks on my to-do list and spending some time with friends. Of course, those visions were lost right after my last class on Friday, when I spent the evening just chilling in a hammock on our porch, listening to music.

Since most students were visiting home or travelling over the break, the campus was unusually quiet and empty. The majority of those who stayed on campus were international students or west-coast residents. The dining halls were closed and there were no events happening on campus. So on Saturday night, some of my sophomore friends from India and I gathered for a small dance party at my nearly empty house. After a long time, I danced to Bollywood music with friends and played cards against humanity with them. They even had a mini foosball tournament at three in the morning.

I woke up at noon on Sunday, made pancakes for breakfast and walked around Beebe lake with a friend. The Cornell campus – especially the trails and surrounding natural areas are glorious at this time of the year. Given the good weather over the weekend, it was a pleasure to just be here. 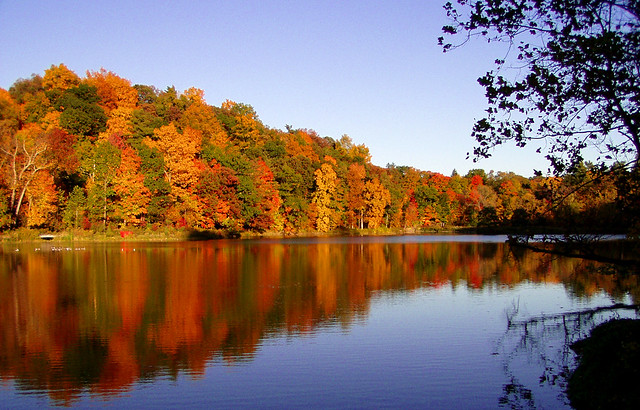 Beebe lake in the fall

On Sunday night, my two housemates who stayed here during the break decided to watch Gone Girl at the Ithaca Mall. I had read excellent reviews for the movie, so I joined them too. Since then, I have not stopped raving about the film and it takes much self control to not spoil it for my friends who haven’t watched it yet.

After a long, refreshing night of sleep that night, I had a sumptuous brunch at the Mehak buffet, where for once, they actually had paneer in the paneer dishes. Then I spent most of my day at the library. I read for fun, something I don’t get to do often as a Cornell student. That evening, a friend and I decided to go to Moosewood Restaurant for dinner. This restaurant is among the first few things I tell people when I describe Ithaca. I am a big fan. We decided to go at 8pm, but we missed our bus and ended up walking to the Commons from West campus (not such a long walk, surprisingly). When we arrived at 8:32pm, the host politely told us that they closed at 8:30pm. We browsed restaurant row in the Commons and finally ate at Taste of Thai.

On Tuesday morning, most of my friends who had left Ithaca for the break were back. So I met some of them at CTB; we chatted about our respective breaks and made plans for future breaks. As we walked back to campus, I saw someone riding a Big Red Bike. For a long time, I had wanted to ride a bike on campus. The weather was warm and we all had some time on our hands, so we decided to borrow a bike from Uris Library.

We got a bike and as I tried it out on the Arts Quad, I realized that these bikes were quite different from what I was used to at home. My bike at home was heavy and required a lot of effort on my side to move. This bike accelerated at the least pedaling, within a second of my riding it. I panicked and searched for brake, which is horizontally parallel to the right handle in all the bikes I have ever ridden. Before I could find the brake, which was below the right handle, I saw some children playing on the path ahead. In an effort to stop the speeding bike, I ended up falling and scraping my knee. (Yes, the kids were safe. Is this how heroes feel?.)

It had been years since I had last scraped my knees. I regretted my decision to ride that bike on the Arts quad without even knowing where the brake was. But I guess we don’t take risks or learn many new things as adults because we are so afraid of failing or getting hurt. I convinced myself that I had learnt something new today: Learn how to stop something before starting it. I felt like a child all over again as I cleaned my wound and went back home.

And there end the tales of Fall Break 2014. I spent the rest of the evening doing some last minute homework and writing this blog post. It’s time to get back to the busy rest of the semester ahead.

At the end of each day, I look forward to going home. When I return home to the cook group playing upbeat music, housemates swing dancing in the kitchen or just playing foosball in the living room, it makes up for a long,exhausting day at Cornell. For me, home at Cornell is a small, blue house on North campus.

I still live one of the co-operative house on campus. Although the building is owned and supervised by the university, the house itself is self-governed by the nineteen undergraduate residents. Until now, I have always painted a rosy picture of my co-op life. Perhaps, being a freshman in a house where half the residents were seniors did not allow for much opportunity for me to handle problems in the house. So much so that I did not even think there could be problems in the house.

This semester, I am a house officer – treasurer for Whitby and half of our residents are new – they moved in this semester. So I feel more responsible, or more entitled towards house operations. It ranges from are we getting enough bread/bagels for breakfast? Does our budget allow for a new house printer? Why is our kitchen so messy during the weekends? Why aren’t people doing their chores? Can we sponsor more house events to increase bonding between residents?

Being able to make decisions about how our co-op runs, how we live and what we’d like our house to be gives me a greater sense of belonging to the house. It feels more like it’s my own home and not a university building I have signed a contract for. But the issues we face are sometimes more complex than which printer we want to buy.

When your cook group goes to the kitchen on Sunday afternoon to prepare dinner for the house and finds the sink full of dishes, used pans with remains of two day old omelettes and counters stacked with kitchen applications, it’s hard to love your co-op in that moment. Since there is no way to tell who all contributed to this mess and how much, a handful of people must take the responsibility to clean it up. In recent weeks, I have often had to help clean up this collective mess.

I wonder if the house was like this last year as well. Even if people had not shared their responsibilities equally, I don’t recall being frustrated about it. Then I realized that last semester, I just did not take it upon myself to clean the occasional collective mess. There were some older housemates who would often clean a mess they did not contribute to. Then they’d send an email to the house list-serve about cleanliness. Now I am that older housemate.

At some point during the collegetown apartment lease madness, I even considered moving out of my co-op because I was so frustrated with cleaning others’ mess. But when I went to the kitchen that weekend, it was neat and someone had baked cookies for the house. I definitely didn’t want to move out. This place and the people aren’t perfect, but no home or family is.