We fail to notice an object’s presence when our very own presence is elsewhere. Yet, in the active moment when an object suddenly plays the character of ‘tool,’ its defects will suddenly rob us of all concentration. As Harman states, “there is a ubiquitous opposition… between two modes of being: those known as ‘ready-to-hand’ and ‘present-at-hand’” (Heidegger, 99). Just as objects seem to change ‘identity’ in differing contexts, concrete poetry in itself can allude to the creation of its own object (Novas, 236). As concrete poets present their readers with structural ambiguity, we are stifled as our mind-set is challenged to adapt to poetry as a new pictorial: content is lost, fruitful words suddenly become lifeless, but oddly and crucially representative or symbolic. This type of objective-hood actively reminds us that a concrete poet’s intentions are not always defined. Poetry starts to become an artistic form of manipulation, a result of meticulous design, and the reader now has a new goal to explore a poem’s overall materiality, rather than boggling conceptuality.

The first cruciality to understand is how an object differs from ‘things,’– or, in this context, how a concrete poem with object-hood will differ from any other, ordinary poem. In comparison to a pluralized form of ‘things,’ or poems which are just ‘text on a page,’ objects can be partial or whole, and when thought in their own sphere, will seem to carry some sort of character, (or ‘object-identity’) according to the atmosphere it is placed in. Also, when considering how concrete poems are constrained within space, the positive space (the textual letters) and negative space (the space between the words) now both serve as functions to be purposeful. These forms of space may be concretely segregated, or the two spaces may even interact. Consider the shape of the following poem, “The Mouse’s Tale” by Lewis Carroll (Alice’s Adventures in Wonderland) as an entire object: 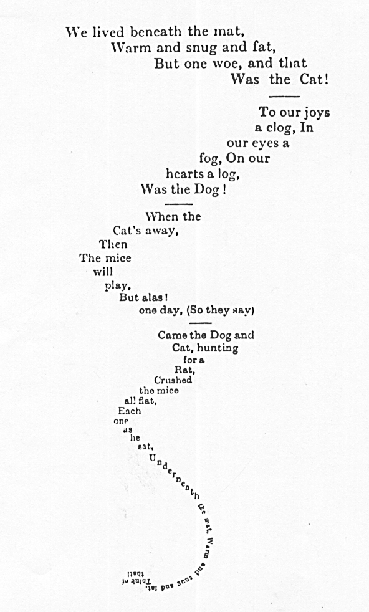 Immediately, we, as the readers will be inclined to think of the shape of a mouse’s tail- spiraling, twisting, and being irregular. The holistic visual shape penetrates our senses first, and we imagine the spiral slowly disappearing at a vanishing point as it smoothly travels down the page, and this is before we even bother to absorb the actual, textual content. One can even examine the way that the centralized position of the tail is purposeful on the page– its placement in any other orientation would not be as effective, for example, if space around the tail constrained it within a thin, surrounding outline (perhaps the shape would suddenly become entirely animal-like, like a snake). Before we understand the context, finally, our eyes our forced to converge the letters downwards and the letters become more and more de-magnified, we realize that Carroll’s poem functions as a tail not just frozen in time, but subliminally still moving. Our eyes are directed to move with the quick, twisting, slinks and the words suddenly become a function of tiny, moving objects collectively moving in the same manner of the motion of the mouse, and the actual content of the poem is now playful, and full of life.

Concrete poetry, as it becomes an object, possesses its own demeanor, is unable to be penetrated, and need not to be interpreted. Its objective-hood becomes a void described by space and shape: aloof and unusual, and only the ideals or purposes in it are resonated from it. The internal poem itself becomes un-crackable, and deconstructing it (both literally, and figuratively) becomes impossible. What the poem is built upon becomes the material, and the implications of the material may change entirely based on the environment it is in– for example, the wood which is used to construct a house, versus the wood which makes up a guitar, as Heidegger states, “…the primarily reality of entities is not their sheer existence as pieces of wood or metal or atoms. The wood in a primitive sword and that in a modern windmill occupy utterly different niches of reality, unleash completely different forces in the world” (Harman, 96).

The transformation of the concrete poet’s work into a function can often result in interpretation that is unfavorable to the reader. Because the concrete poet will  challenge the average reader’s mind-set, one is inclined to re-interpret how “language still leaves humans in absolute command” (Harman, 94). Concrete poetry breaks these boundaries  because the ‘poetic artist’ now changes the course of meaning to manipulate something abstract. Through such an unusual assortment, the poem becomes fleeting, and possibly unable to be grasped– and furthermore, the goal of the poem may not even be to produce any sort of meaning, but rather, and in conclusion, is “neither material nor rational, which means that it must be both immaterial and substantial, in a sense yet to be determined” (Harman, 104).