jigeddy jig . . .There’s also some quote about travelling and returning home again to know the place for the first time but nether the Columbia Granger World of Poetry nor Google is being very helpful about it right now and I am going to be a lazy and jetlagged excuse for a librarian and fill it in later. Right now, I’d like to curl up with my mac and cheese (I swear to God, Stouffer’s must put some kind of cheesy crack in this stuff it’s so good), occasionally glance out the window at the sudden and beautiful fall I find myself in again, and read and perhaps watch some loud, useless, sparkly, incredibly American movie on TV.

Just posting a quick message to say I’m on my way home. Mom and Lisa, I’m not sure you got the messages I left for you since my phone card was acting funny, but I should be home Saturday about 11 AM if my flight plans go well; there was a delay with my initial flight and I am in London overnight. I should fly out tomorrow at 8:20 AM on American Airlines flight 115. Lisa, don’t wait around; I might be going straight home if things work out with my luggage.

More to follow but I’ve been keeping up with email at least, if not blogging. I checked email Thursday and found out that I’d gotten an email to Mann staff about Ans van Tienhoven. I was dismayed to hear that she’s had a heart attack. She’s in the hospital undergoing treatment and her family is with her. I will be sending my best wishes for a full and speedy recovery as soon as I get back to the States. I have to say that the van Tienhovens are one of the sweetest couples I ever met and so cute togther even after all the time they have been married (they remind me of Grandmother and Grandfather, Mom and Dad). The travel award that I won is named after Ans and was dedicated by Ari because he said wives and librarians didn’t get enough credit (how sweet is that?). They are part of the Mann family and they‘ve given so much to others over the years. I wouldn’t even be taking this trip without their generosity. I hope that karma and the universe operate as they should and that Ans gets back all that good energy and well-being.

I said goodbye to Gracian, Steve and Vimbai last night (the breaking of the Fellowship!). And since it had calmed down enough that I was able to go into the city I managed to pack in a lot of sightseeing and shopping. The Director of the Institute of Ethiopian Studies, Elisabeth Giorgis, who was recommended to me by Prof. Ayele Bekerie at Cornell, was kind enough to see me on very short notice and have a staff member give me a tour of the Institute’s museum and library, which were the best colections of material on Ethiopia perhaps in the world. They were certinaly impressive and broad, including their setting (Addis Ababa University in the old palace of Haile Selassie). I also saw the National Museum (which houses the skeleton of Lucy, once thought to be the oldest human ancestor (though more ancient remains have been found)). The latter included artwork, belongings of the family of Haile Selassie, and ethnological displays as well. And then of course there was whirlwind shopping! I also got to meet with the head librarian at ILRI, who talked with me about their impressive collections as well (including a collection of approx. 25,000 microfiche of publications on livestock and agriculture from various Africancountries’ national institutes–a rich trove of grey literature they are interested in digitizing). And then I ended the day at another cultural restaurant. Not a bad last day!

I figured I’d better get some of this down before I forget in the whirlwind of travel; the next few posts (depending on how much Internet time I have left, will be pallceholder posts. The last day of the workshop went off well, and we closed out the round of workshops with a celebratory dinner at a traditional cultural resturant where we had our first taste of truly Ehtiopian food, singing and dancing. I wished I had brought my video camera yet again! Gracian and Vimbai caught up with the Zimbabwean ambassador, Vimbai and Steve had meat “on fire” (lamb I think) and Gracian and I had the national fasting and non-fasting dishes (a plethora of doro wat (a kind of chicken stew) and other dishes all served on the traditional injera bread). A very nice end to our time. Again, more on this later. . .

As the second day went on, we actually gained more participants–three new guys and a woman from Addis. It’s all gone well despite a few technical glitches, and we are heading into our third and last day.

I figured I’d take a moment to detail a few of things I’ve learned along the way as far as Ethiopian culture: 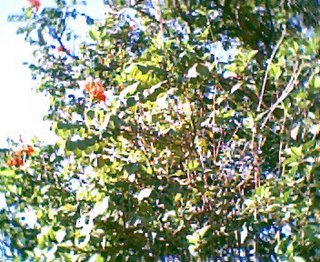 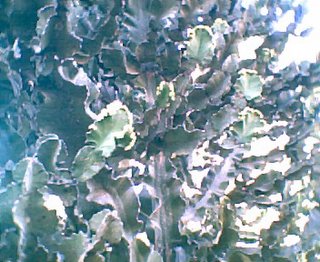 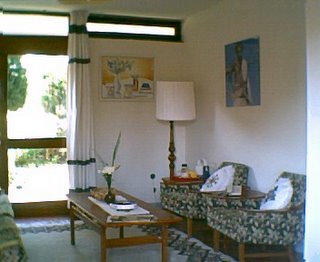 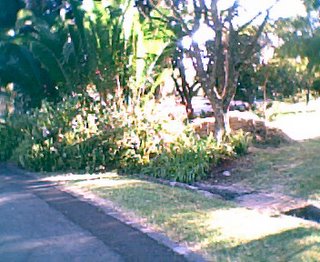 So the ones below are of the campus (the middle one is of the guesthouse–the room on the corner is where I am staying–and the one of the walkway is the path leading to our training room). I’ll stop with a few flower and cactus pictures and one of my sitting room. Steve has generously offered the use of his much better quality photos so more soon. . . 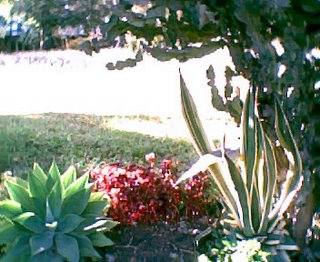 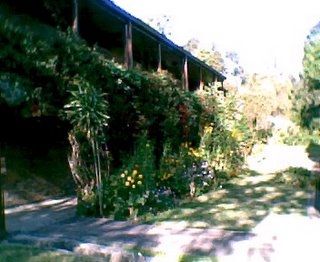 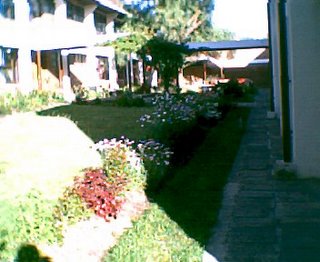 Steve has taken some really excellent photos that I wish I could send (he’s an excellent photographer as well as darts player; he totlly killed at darts last night when we were playing this game called “Cricket” (loads of fun, esp. with beer:), but I think you all are going to have to make do with my cheap keychain camera photos for now. Sorry! More to come. . .

So now we’re waiting until quarter past 9 to see if we’ll actually be having the workshop. The opposition called a general stay-at-home strike for this whole week so public transportation is difficult (the state-run buses are running I heard, but the taxis aren’t and youth are stoning privte cars on the road in town). So far only three of our out-of-town participants came out of about 10 or 11, and we have two more from Addis. The “disturbances,” as everyone calls them, kept people away since they weren’t sure what kind of transport they would find once they got to Addis, and it may take the in-town participants some time to get in. Apparently it’s fairly quiet in town since it’s a stay-at-home strike. . .

Afternoon now. We ended up with about 10 people, which wasn’t bad and proceeded as planned with the workshop. We’ve ended a bit early since the staff bus back to Addis went at 4:30 and took half our participants with it. Two of the Addis participants are staying here so that they don’t have to worry about getting back and forth. Loza arranged it all; she’s been wonderful. We’ll start again tomorrow and combine the modules that Vimbai and I were going to do this afternoon. Gracian, Vimbai and Steve have been great with rolling with the punches and adjusting on the fly. I’m seeing how important it is to have great people who are used to the contexts.

The first day went well and we actually got to do more hands-on since it was a smaller group. It would still be nice to find a way to consolidate a bit more in the intro to AGORA and HINARI and electronic resources part, but Gracian says the trick is to do it without overwhelming the users. From a training point of view collapsing a lot of content seems fine but once you see users struggling with browser functions, one thing at a time becomes paramount.

Since we’ve got more of the afternoon, I’m going to try and post the pictures I took with the cheap keychain digital camera I bought ($20!). As you can guess from the price, the quality is not stellar. But I may be able to show you some of the flowers and trees I’ve been seeing on campus, and give you a bit of an idea about the beauty of the ILRI campus. As we said this weekend, it’s not a bad “prison”:) A big contrast to the actual ones here; I heard this mornning that the government has jailed about 10-11,000 young people (about 4,000 of those young women) in a prison way outside Addis in a malarial region. . .Hearing stuff like this just makes reading the government statements more ironic–see http://news.bbc.co.uk/1/hi/world/africa/4413694.stm. As someone said, it’s like when a husband murders his wife. afterwards, the news asks him how he feels and of course, he says I regret it deeply.

Looking at this in comparison to the French riots (http://news.bbc.co.uk/1/hi/world/europe/4413250.stm), the results seem the same but the causes different. I know there was a lot of tension in France ten years ago between those from the former French colonial territories (“departments outre-mer” I think they were called–mostly North African countries like Algeria, Morocco, tunisia; some sub-Saharan African countries like the Ivory Coast, Senegal, etc., and the Caribbean like Maritinque and Guadeloupe) and the rest of the French population. I know that before I opened my mouth, if it wasn’t immediately obvious I was American, or if I was with friends from these places, I’d get flak on rare occasions. And the situation in the projects in the outer parts of cities in Paris was similar to a lot of inner cities in the US, so it’s not surprising to hear that long-held tensions have spilled over. It’s just a shame that it has come to this.

Here in Ethiopia the causes are more obviously political–the government is trying to supress the opposition and the opposition isn’t having it anymore–but in some ways it seems a similar situation of disenfranchisement. Any time to you supress people to the point where they feel their only recourse is violent protest, you have a problem.

It’s hard to equate the two situations in other ways. Ethiopia is political (with ethnic overtones). France is political in different way–a leftover colonial situation it seems (with economic and social as well as racial and religious overtones); it reminds me more of the US.

But I am not known for detailed political analysis:) and this probably not why you’re reading this blog, so pictures . . .

Just a few notes to myself from my Bloglines account so I don’t lose them:

Thought son what you want to be remembered for from Pter Drucker’s “My Life as a Knowledg eWorker” http://blog.mathemagenic.com/2004/05/12.html#a1202

Just a few notes to myself from my Bloglines account so I don’t lose them:

Thought son what you want to be remembered for from Pter Drucker’s “My Life as a Knowledg eWorker” http://blog.mathemagenic.com/2004/05/12.html#a1202